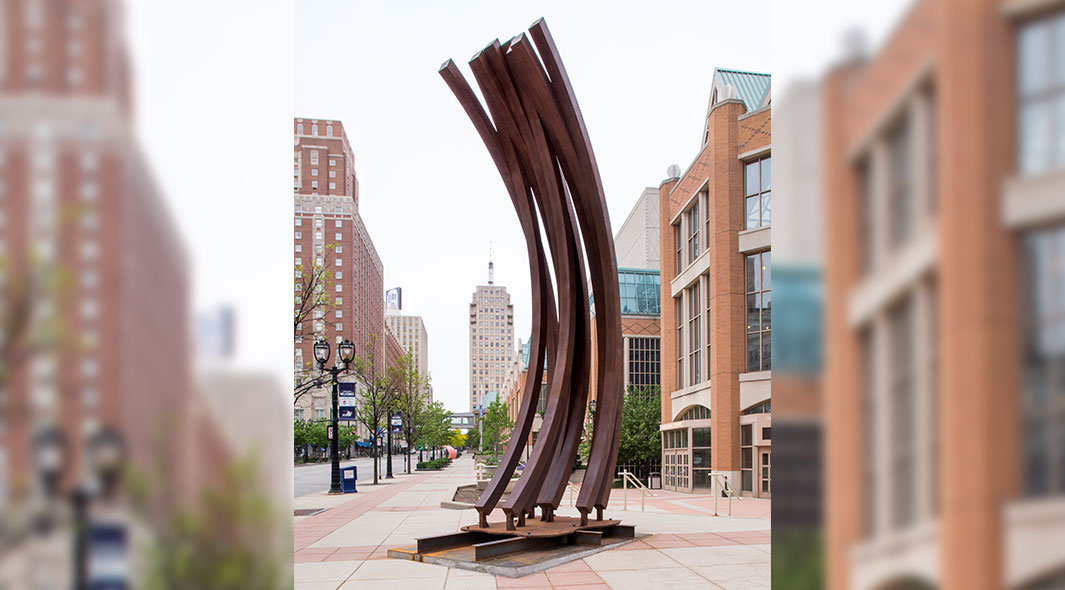 Courtesy of the artist and Paul Kasmin Gallery, New York

Bernar Venet produces sculpture, painting, drawings, music, theater sets, poetry, film, furniture and stained-glass windows. He started as a conceptual artist in the 1970s, not relying on the materiality of product to create his work. Venet is a “systems” artist—he uses self-generated systems to drive the shape of his lines and arcs. His constant insistence on lines—straight, curved, broken or indeterminate—is a common thread throughout his fifty-year career. Like many of the Minimalists of the 1960s and 1970s, Venet relinquishes authority over his creations, yet the clarity of his vision is what links the works together.

97.5° Arc x 9, 2007, is exactly as described: the 9 lines at 97.5-degree arc bend in a permanent wind, the metal lines seeming pliant against the invisible forces of nature. While using mathematical systems to generate forms might suggest the removal of the human hand, ultimately math is rooted in nature, the artist unable to escape the very environment in which his works live. His architectural-scaled arcs and lines resist the rigidity of building geometry; his works are more like slumped building infrastructure. Venet makes something hard look soft, playing with our sense of the materiality of the world.

The artist was awarded the Grand Prix des Arts de la Ville de Paris in 1989; the Commandeur dans l’order des Arts et des Lettres from the Minister of Culture, France, in 1996; a Chevalier de la Légion d’honneur, 2005; the International Julio González Sculpture Prize in 2013; and in 2016 was the recipient of the International Sculpture Center’s Lifetime Achievement Award.