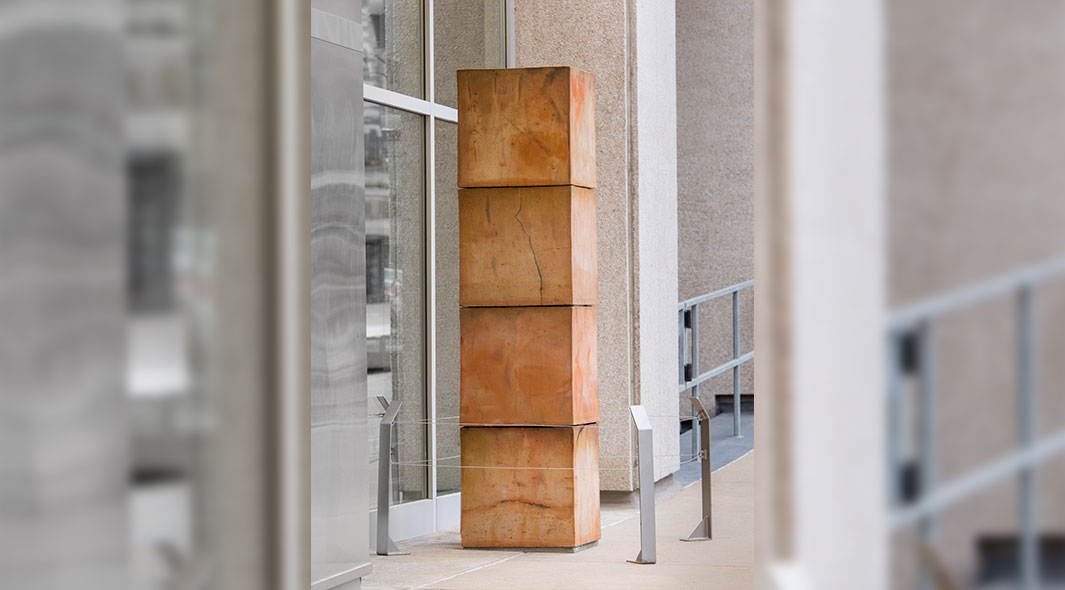 Courtesy of the artist and Paul Kasmin Gallery, New York

Bosco Sodi creates paintings and sculptures using materials from the earth. He has been deeply influenced by the Japanese fascination with the beauty of imperfection, seeing aesthetic value in the disarray of everyday life. Throughout his work the artist juxtaposes the natural against the cultural, resisting our need to impose order on nature.

Over the past several years, Sodi has been creating stacks of cubes made in the same way that ancient peoples did for millennia. Out of the clay the artist coaxes a shifting palette of earth tones, which varies on each side. Sodi’s rich earth tones speak of a very different social and geographic climate than this downtown. Because more arid climates do not have the same radical seasonal shifts as Milwaukee, we might not be attuned to the subtle detail and coloristic effects of Sodi’s cubes. His nuanced details come to light with quiet study, forcing us to slow our attention made too frenetic by the pace of our contemporary world.

This piece in particular is deeply figurative, commanding space like a human being might, claiming space against the hard edges of a modern urban center. By placing Sodi’s cubes on Milwaukee’s main street, the juxtaposition of nature versus culture, modern versus ancient becomes apparent, and asks questions about the rise and fall of civilizations.

Sodi, born 1970, has presented his work in one person and group shows across the globe, including Brazil, Germany, Italy, Japan, Portugal, Spain, the United Kingdom and the United States. Recent outdoor projects were held in Washington Square Park, New York, and at the Museo Anahuacalli, Mexico City, both in 2017. His work was included in the Sevilla Biennial, Spain, in 2008. His work is held in public and private collections in Cuba, Italy, Mexico, Spain, Switzerland and the United States.