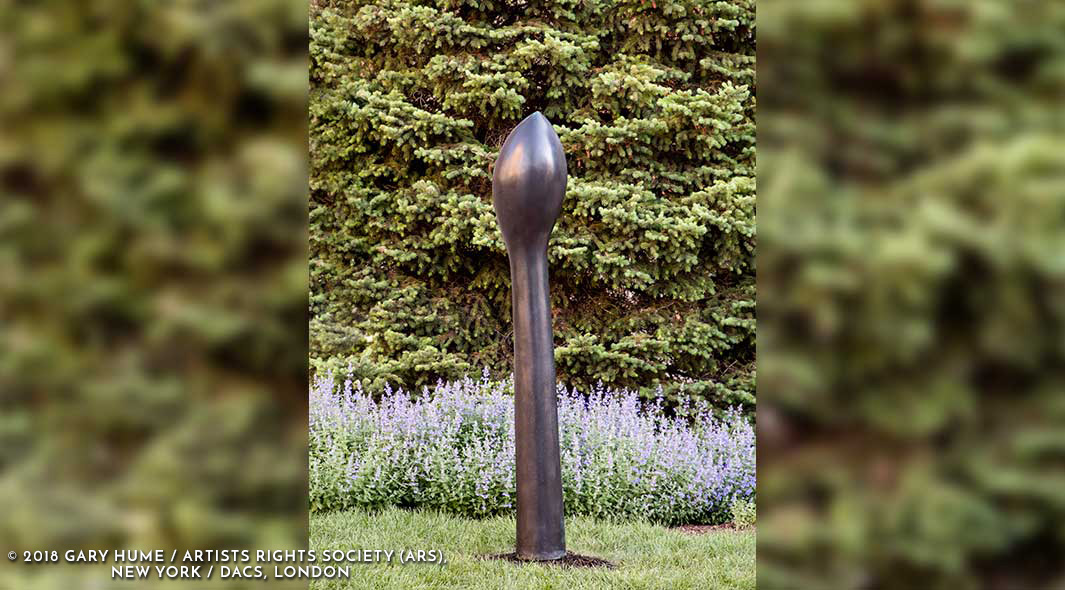 British artist Gary Hume is a member of the Young British Artist [YBA] invasion of the late 1980s and early 1990s, when a tightknit crop of art students from Goldsmiths College, London, including Damien Hirt and Tracey Emin, and promoted by collector and marketing impresario Charles Saatchi, came to the attention of the art world. Hume was included in fellow artist Damien Hirst’s first curated exhibition Freeze, in 1988, and although his work is less bawdy than many of his peers, he has forged an international career with his elegant and spare works.

Hume is known for his cheerful, candy-colored paintings made with household paint, and more recently, over-size sculptures that recall the flora and fauna around us. For example, his painted and sculptural snowmen series use a perfect geometry rarely found in snowmen, the artist highlighting the difference between the ideal and real. Despite his cheery pop colors, there is an unsettling psychological edge in the work. Hume tries to find the line between human and humanity, exploring challenging existential questions that plague adult life.

In Bud (bronze), 2016, Hume continues to create work that confounds figuration and abstraction, long pitted against one another by modern critics. The bud is human scale, growing like a science experiment gone wrong. Hume abstracts the work by smoothing out its contours and removing the joyous spring color which gives relief after a long dark winter. The piece becomes menacing, its dark patina standing grim against the colors of summer. Hume tries to give us a cheery, but not too cheery, experience, a little bit of joy tempered by the realities of life.

Hume, born 1962, began showing his work nationally and internationally in the late 1980s. He has had one-person exhibitions in Austria, Germany, Ireland, Italy, The Netherlands, Portugal, Spain, Switzerland, Ukraine, the United Kingdom and the United States. Museum shows include the Aspen Art Museum; Modern Art Oxford, United Kingdom; Whitechapel Gallery, London; and the Scottish National Museum of Modern Art, Edinburgh, among others. Hume represented the United Kingdom at the Venice Biennale in 1999, and the Bienal de São Paolo, Brazil, in 1996. The Tate Britain organized a survey show of Hume’s work in 2013.