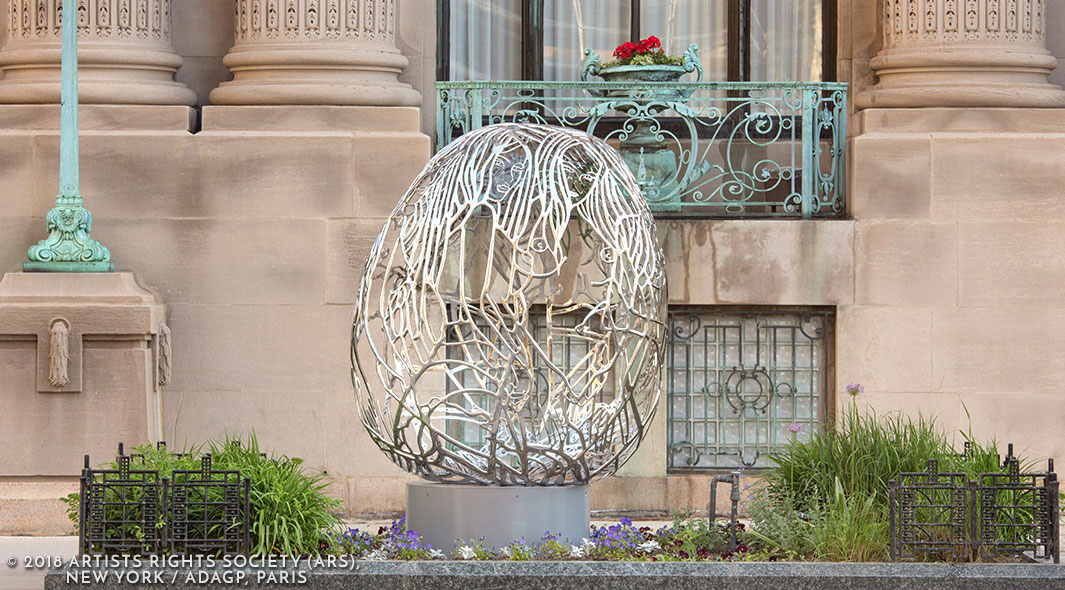 Egyptian artist Ghada Amer is well known for brightly-colored, embroidered paintings that address the ways in which women in Islamic countries claim their personhood through fashion. Amer began her gestural paintings in art school in France to counter what she perceived as the machismo of the abstract expressionism and tachisme* of her male teachers. By using the traditionally feminine, domestic activity of embroidery in a gestural manner to both decorate and obscure her figures, Amer confronts cultural objectification of the female form.

The artist paints images appropriated from men’s magazines, and then masks them with layers of brightly colored embroidery thread, tossed like drips and splashes of Jackson Pollock paint. Rather than the dark clothes imposed by religious leaders or cultural tradition, Amer’s women frolic like nymphs under waterfalls of decorative filament, creating their own communities of joy. Amer was inspired by the fashion magazine Venus, which combined French fashion with Middle Eastern mores. Amer draws from East and West to create her delicately aggressive works.

In her new series of sculpture, Amer brings her figures into the world. The decorative metal work of Blue Bra Girls evokes the window-mounted wooden mashrabiyas, or latticework panels, behind which women were sequestered in some Middle Eastern societies. We get glimpses of Amer’s characters, attending to their bath, or lives, outside the visual gaze of the male world around them.

Ghada Amer was born in Cairo and moved with her family to France in 1974 to escape the increased polarization of the country after the Six-Day war with Israel. She attended art school at the Villa Arson in Nice, where she graduated with an MFA in painting in 1989, and currently lives and works in New York. Her work was the subject of a Brooklyn Museum survey show in 2008, titled Love Has No End. Amer’s work is represented in many American and international collections, including Mathaf: Arab Museum of Modern Art, Doha, Qatar; Art Institute of Chicago, Chicago; Centre Georges Pompidou, Paris; and the Tel Aviv Museum, Israel.

*From the Tate on-line: tachisme is used to describe the non-geometric abstract artthat developed in Europe in the 1940s and 1950s characterized by spontaneous brushwork, drips and scribble-type marks.