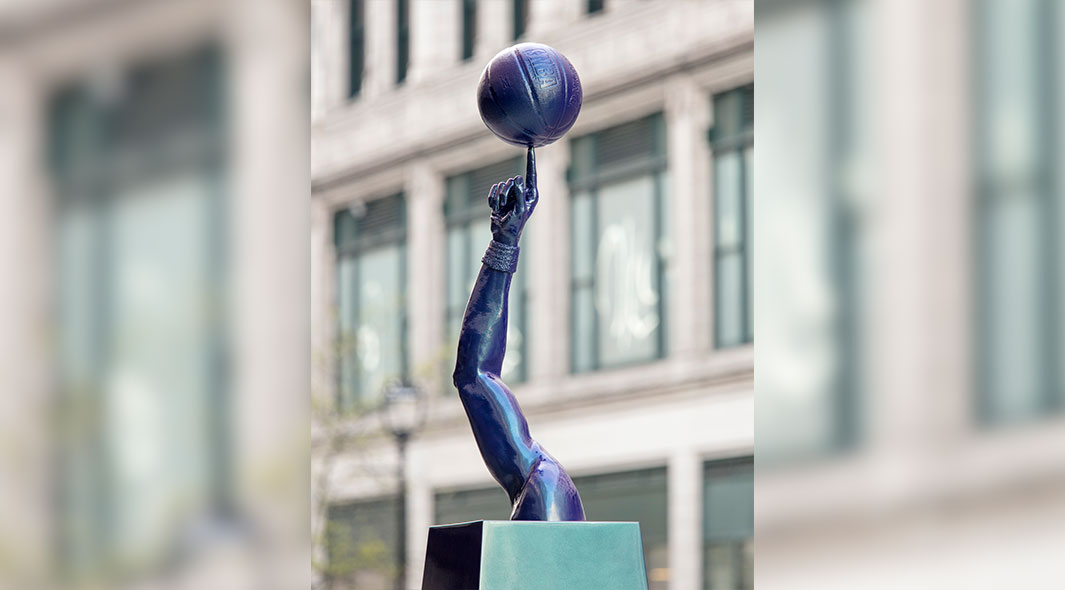 Courtesy of the artist and Jack Shainman Gallery, New York

New York-based artist Hank Willis Thomas explores how identity and ideas of race are shaped by the media and popular culture. Through photography, sculpture, film, installations and public art works, Thomas appropriates recognizable imagery to critique how advertisements brand us. He works through popular clichés to expose the ways they shape how we see ourselves and each other.

Liberty, 2015 was originally presented in New York by the Public Art Fund, which described Liberty as “…a life-size, candy-coated bronze sculpture derived from a 1986 found photograph of a Harlem Globetrotter [retired NBA All-Star Juwan Howard.] He spins a basketball on his finger, in the likeness of the Statue of Liberty, which is featured in the background of the image. In a digital era where electronic devices mediate our viewing experiences, the three-dimensional arm, appropriated from the photograph, invites the viewer to consider the framing and context of the images that surround us.”

Liberty is part of Thomas’s Punctum Series, which draws inspiration from the French philosopher Roland Barthes idea of the punctum: that “element which rises from the [photographic] scene, shoots out of it like an arrow and pierces.” Using this concept as his foundation, Thomas selects a specific area of an image and re-presents it as sculpture. Through cropping and isolation, he encourages us to contemplate framing itself: what is left in or out of the photograph, narrative or account of a historical event, and why?

Thomas was born in 1976 in Plainfield, New Jersey, and lives and works in New York. He received a BFA in Photography and Africana Studies from NYU in 1998, and his MFA in Photography and MA in Visual and Critical Studies from the California College of the Arts in San Francisco in 2004. His work has been featured in several publications including 25 under 25: Up-and-Coming American Photographers (CDS, 2003), 30 Americans (RFC, 2008) as well as his monograph Pitch Blackness (Aperture, 2008). Recent one-person exhibitions have been held at: Savannah College of Art and Design Art Museum, Georgia; the Weatherspoon Art Museum at the University of North Carolina, Greensboro; the California African American Museum, Los Angeles; the Aldrich Museum of Art, Ridgefield, Connecticut; the Corcoran Gallery of Art, Washington; and the Brooklyn Museum of Art.

Thomas' work is in numerous public collections including the Whitney Museum of American Art, The Brooklyn Museum, Museum of Modern Art and the Solomon R. Guggenheim Museum. His collaborative projects have been supported by the Tribeca Film Institute, Open Society Foundation, The Ford Foundation and have been featured at the Sundance Film Festival

He has held residencies at the Ellen Stone Belic Institute for the Study of Women and Gender in the Arts and Media, Columbia College, Chicago; the Cité Internationale des Arts, Paris; the W.E.B. Du Bois Institute Resident Fellowship, Harvard University, Cambridge, Massachusetts; the Amistad Center for Race and Culture, Wadsworth Atheneum Museum of Art, Hartford, Connecticut; and at Art Omi, Ghent, New York, among others.