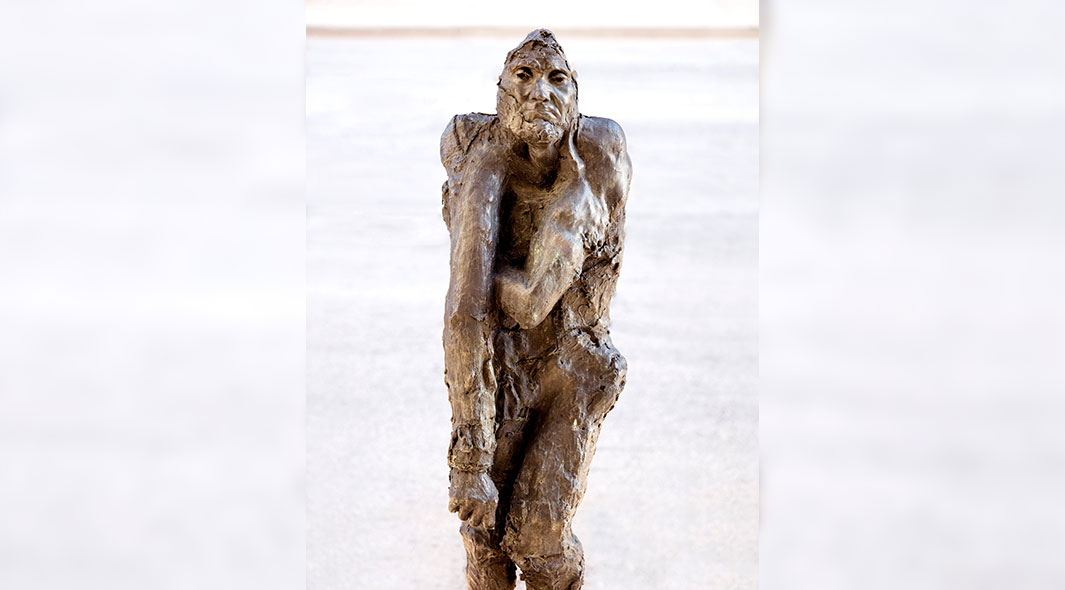 Courtesy of the artist and Paula Cooper Gallery, New York

Through her installations, performances and sculptures, Los Angeles-based artist Liz Glynn conducts historical research that links our current world to our past. Everything is contemporary at one point in time, and Glynn reimagines how individuals might help shape future outcomes through engagement and imagination.

Untitled (Burgher with extended arm), 2014, comes from a series of performances focused on monumental sculptures in the collection of the Los Angeles County Museum of Art. Glynn and her crew cast molds from 19th century French artist Auguste Rodin’s work The Burghers of Calais, 1884-89, using Rodin’s own studio practice of fragmentation and recombination to create unsettling versions of an already disquieting tableau. In the Burghers, Rodin depicts the moment when the French leaders surrender to the conquering British forces who besieged Calais from 1346-47. While Rodin’s work is monumental, its depiction of the heroism of self-sacrifice veers sharply from traditional public sculptures that celebrate history’s winners.

Glynn has achieved something very sophisticated in this work. She cannibalizes one of the 19th and 20th- century’s leading sculptors, using his own working processes to make the old contemporary again. She provides contemporary footnotes to Rodin’s casting process, reminding us that his work has been cobbled together with limbs cast during his life, and by his estate after his death. Glynn reminds us that Rodin himself questioned the myth of a singular image emerging from a singular (male) genius, undermining the very foundations of modernism.

And through her work, Glynn mirrors the social fragmentation of Rodin’s time—the upheavals of industrialization, the jarring new forms of art pioneered by Rodin and his contemporaries—through this attenuated body. Her disjointed figure speaks to the social and technological upheavals of our time, each person pulled in different directions by the constantly changing social and economic climate, unable to find one stable image of the world.