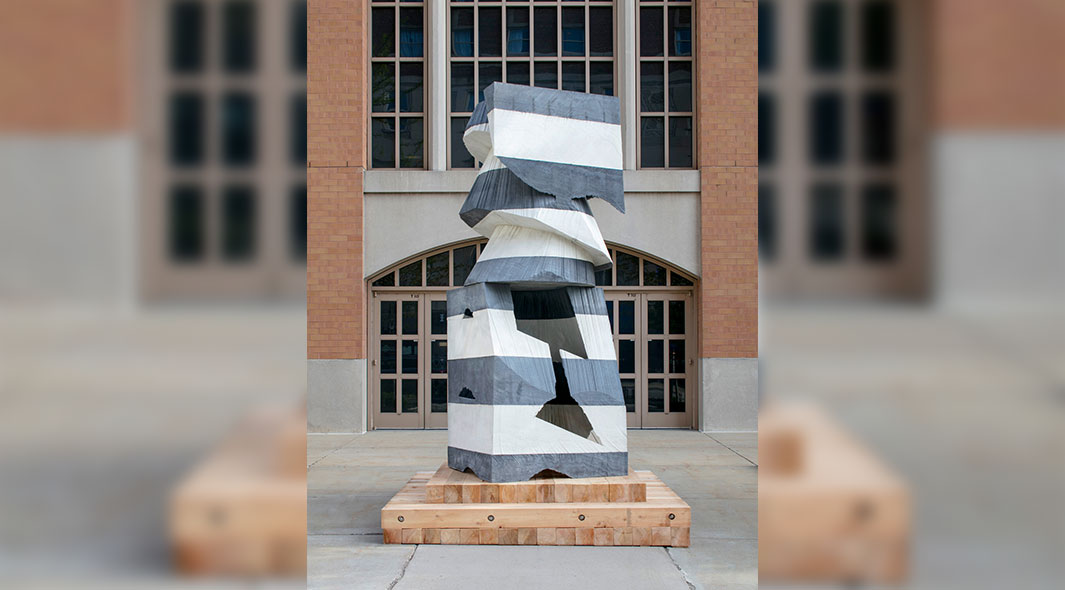 Courtesy of the artist and David Nolan Gallery, New York

Since the early 1970s, American artist Mel Kendrick has been cutting into, slicing off and boring through pieces of wood to create roughly elegant sculptures. Kendrick has also used drawing and print-making to explore the interactions of negative and positive space. In the 1980s Kendrick began making bronze casts from existing carved or deconstructed works to continue his experimentation with ways to take apart and re-create space.

It is in the Marker series, begun in 2009, where we see Kendrick’s interest in architecture and the built environment most clearly. Kendrick uses concrete to build actual architectural monuments. The scale of these works hover between body and building, between heavy and light, between horizontal and vertical. The emphatic black and white banding follow a long tradition of architectural marking that dates back to the Roman era, was again picked up in medieval Italian church architecture and erupts again in the post-modern work of architects such as Mario Botta.

Kendrick’s banding anchors the works to the street, the perforations and apertures allow us to see the sky. Like a giant Rubik’s cube, Marker #2 encourages us to twist the shapes in our minds, rotating them around their central core, sliding the parts back into place. Kendrick evokes our experience of walking through the city, where each layer of building façade, billboard and signage stacks upon one another, making and unmaking the visual environment through which we move.

Kendrick was born in Boston in 1949, and he has lived and worked in New York since the early 1970s. Recent one-person shows have been held at: University of Alabama, Tuscaloosa; the Parrish Art Museum, Southampton, New York; The Fields Sculpture Park at Omi International Art Center, Ghent, New York; the Hood Museum of Art, Dartmouth College, Hanover, New Hampshire; the Tampa Museum of Art, Florida; and the Weatherspoon Art Gallery, University of North Carolina, Greensboro; and at galleries across the United States. His work has been included in group shows at: the Nasher Museum of Art, Duke University, Durham, North Carolina; the Yale University School of Art, New Haven, Connecticut; Arizona State University Art Museum, Tempe; the National Academy of Art and Design, New York; the Contemporary Art Museum, Houston; and the Hunter College Leubsdorf Art Gallery, New York, among many others. A survey of his small wood works traveled across the country from 1988-90.