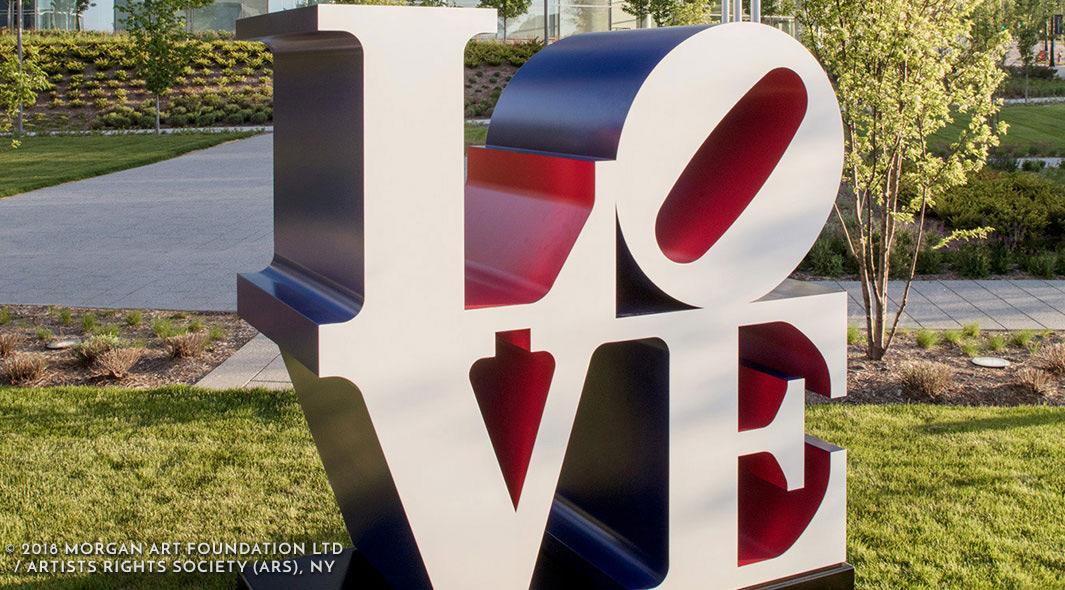 As part of the 1960s Pop Art generation, inspired by American post-war prosperity and the rise of modern advertising, Robert Indiana helped provide an important visual backdrop to the cultural upheaval of his time. His paintings and assemblages incorporated words and letters that evoked Madison Avenue and Main Street, providing subtle commentary on changing social relations in the country.

Like fellow Pop artists Andy Warhol, Robert Rauschenberg, Jasper Johns, Roy Lichtenstein and Claes Oldenburg, Indiana mined popular (or “pop”) culture for its personal and political meanings. Indiana was always noted for his deep sincerity, however, as opposed to the tongue-in-cheek work of his New York and Los Angeles-based peers, a trait that gives the work a different kind of richness.

Indiana’s LOVE series is iconic, with endless meanings and implications. The bold graphic style of the lettering is part of the artist’s appropriation of advertising, giving this particular work a flavorful punch. This emotionally generous and accessible body of work requires us to live up to its simple message of love.

The word “love” first appeared in Indiana’s painting Four Star Love from 1961, and the artist used the phrase in all manner of fine art and commercial products. Indiana’s LOVE works went viral, but because he did not copyright it under the existing 1909 law, the artist’s brand was profoundly undermined.

Many in Milwaukee will remember Indiana’s massive painting for the MECCA arena. Steve Marcus, founder of Sculpture Milwaukee and Chairman of the MECCA Board at the time, with gallerist Judith Posner championed hiring Robert Indiana to paint the court as a way to make Milwaukee pop for the national basketball crowd. The design was so vibrant (and perhaps disorienting) to other teams, Indiana’s floor gave both the Bucks and Marquette University a truly “home court” advantage. Indiana’s floor did not make the move to the new Bradley center, and the current owners are looking to restore the work to a permanent location in Milwaukee.


Indiana, born in 1928 in New Castle, Indiana, took his home state as his last name in 1958. He has presented his paintings, drawings, prints and sculpture in museums and galleries across the globe since the 1960s, beginning with early works in pivotal group shows at the Museum of Modern Art, New York, in 1961. Over the past decade, major one-person shows have been held at: the Pinacoteca Comunale Casa Rusca, Locarno, Switzerland; the Philadelphia Museum of Art; the McNay Art Museum, San Antonio; the Indianapolis Museum of Art; the Whitney Museum of American Art, New York; Seoul Museum of Art, South Korea; the Centre Georges Pompidou, Paris; and the Musée d’Art Moderne et d’Art Contemporain, Nice, France. His work was featured in the Art in the Parks series, Park Avenue Mall, New York, in 2007.