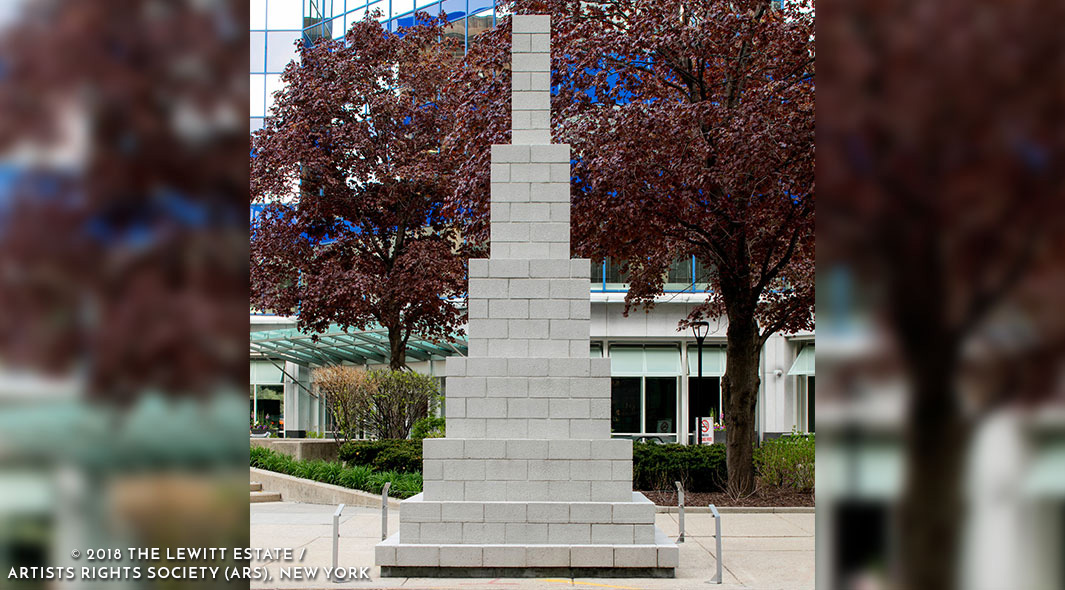 Artist, writer, philosopher and philanthropist Sol LeWitt created an enduring legacy as one of the founders of American Minimalism, a movement characterized by the use of a restricted range of mostly industrial, post-war building materials, in non-expressive shapes and muted colors. LeWitt was also an early pioneer and proponent of Conceptual Art, an ideas-based practice that used the neutral systems of science and math to generate sculptures and wall drawings that could be made by others following his directions

As his career progressed, LeWitt began to loosen his control of the production of his works, allowing for others to help shape them, particularly in his ever-larger, ever-more vibrant wall murals that used color and shape to change the architecture of their rooms. LeWitt is remembered as one of America’s most inventive practitioners, supportive of younger artists while working to make his art accessible to the non-arts audience.

In Tower (Gubbio), commissioned for the XXIII Biennale in Gubbio, Italy, LeWitt has removed his own artistic hand by using concrete blocks, a coarse building material that is part of our modern urban environment but also used by the Romans to construct their cities. There is not a functional purpose to LeWitt’s tower as it inches towards the sky in mathematically proscribed increments.

Like many American cities, Milwaukee’s downtown was hollowed out in the 1960s and 1970s under the pressure of urban renewal and the western sprawl of our freeway system. LeWitt’s work adds an interesting commentary as a new generation of public leaders and citizens re-build and re-imagine what community should mean in the 21st century. LeWitt’s simple building blocks suggest that simplicity and transparency has a great value in a democracy, and his work expresses that ideal.