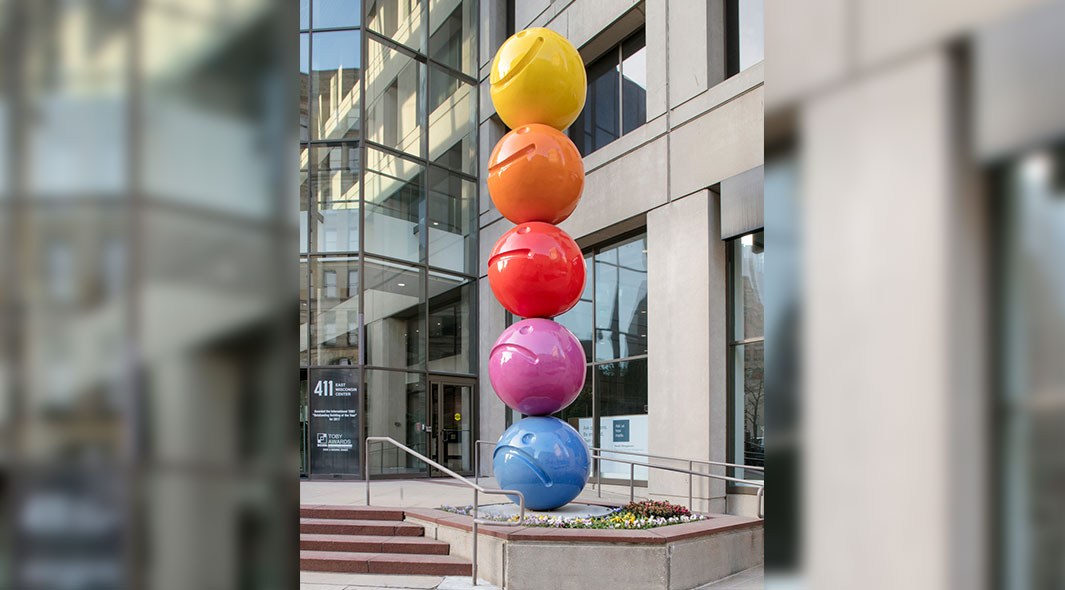 Courtesy of the artist and Kavi Gupta Gallery, Chicago

Over the past decade, Tony Tasset has been making surreal sculptures that draw imagery from American popular culture. His smashed pumpkins recall a well-known Chicago band, a forced fall family trip to the pumpkin patch, or the teenage boredom that would drive a kid to toss hapless fruit into the street. Tasset’s different versions of melting snowman similarly recall the letdown after a snowfall, when our scary snowmen turn into haggard, haunted mounds of snow. Other recent works—a 20-foot tall white-tailed deer, or a Crayola crayon blob monster—all point to the extremes to which we push nature through our scientific knowledge.

Like Pop artist Andy Warhol before him, Tasset looks for images or ideas that are simple and easily understood, allowing the visitor to bring their own set of meanings to each work.

In his totemic Mood Sculpture, Tasset draws from the cheerful smiley faces invented in 1963—the original American emoji—and shows the rainbow range of moods that afflict our days, from the sour grape face at the bottom to the Sunny Delight yellow face on top. His cheery, childlike colors remind us of how radical new ideas of the 1960s have today been packaged into consumer products.

Yet there is something menacing about Tasset’s frozen faces too, as if we have hit pause while watching a horror film. Tasset’s round Mood Sculpture heads are all trapped in time, forever playing their role in the comedy of life.

Tasset’s works has been in museum and gallery exhibitions in Austria, Finland, Germany, Italy, Portugal, South Korea, Sweden, Switzerland, the United Kingdom and the United States. His work has been collected by the Art Institute of Chicago and the Museum of Contemporary Art, Chicago; the Museum of Contemporary Art, Los Angeles; the Museum für Moderne Kunst, Frankfurt, Germany; and the San Francisco Museum of Modern Art. His public sculptures are on view at SONY Studios, Culver City, California; the Nasher Sculpture Park, Dallas; the Nathan J. Manilow Sculpture Park, University Park, IL; and Laumeier Sculpture Park, St. Louis. He was the subject of his first survey at inova, Institute of Visual Arts at the University of Wisconsin-Milwaukee, in 1998.